Some things to think about 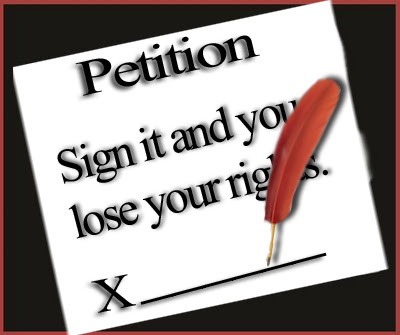 Updates on signing and deportations here!

With residents in more than 30 states filing secession petitions it is looking like it's about to get real because the government is wanting to strip them of their citizenship and deport them. That may or may not be a good thing.  Depending I guess. If this country continues to strip everyone of their rights, take their free speech away and/or censor everything, sign bills into law secretly that ends up hurting the American people, un-arm the people so they cannot defend themselves... then deportation could be a good thing because it really wouldn't be much different from other countries with the exception that those who get deported may actually obtain more freedom and liberty which in all reality has become a thing of the past here in the U.S.  It would seem that people would sign so they can be deported and save themselves the travel expenses but I guess we'll have to see how this one plays out. People are tired of the powers that be who run this country lying and  deceiving the people while taking their freedom, liberty and rights away. It would appear the leader of the free world could very well be the anti-Christ but that too remains to be seen and yes,  everyone is watching very closely.

My concern is this...

They are saying they want to strip of them of their citizenship and deport them but what if their plans are to kill them instead or send them to Quantomeno Bay or a place like, But their just saying they will deport and strip them of citizenship? No one will ever see or hear from them again. All these scenarios are going through my head. It's been proven over the years that the government can not be trusted so who's to say they'll actually deport them and not kill them? When I read that article those are the feelings in my gut that I got. For those of you who signed the petition, please be careful and be aware of what the consequences may be.  Exactly where are they wanting to deport the people to? When and how? These are just things some things to think about. Don't be so quick to sign and if you did... then make sure you are aware of the consequences of what your signing may be. They kill innocent people around the world including our very own everyday in the name of justice so who's to say they won't do that to you?

I have friends all over the world and I have yet to hear any of them complain about their government taking their rights away. Now... I realize no country is perfect and I'm sure they all have their issues but when their own government sets out to deliberately hurt the very ones who gave them their position in power and then they need to be taken out of power as quickly as possible. They are elected because the people trust them to act in their best interest and not conspire to do them harm. It's supposed to be a win-win situation, a matter a trust, honesty and loyalty and unfortunately we've lost that somewhere.

I wish things could be the way it was when Regan was in office but we all know those days of freedom, liberty and justice are gone... we all know this and the current administration only enforces the restrictions or the reality we now know as The United States of America.

Well this is just me expressing my thoughts and concerns using what is left of our freedom of speech, hopefully they won't censor this too!