You control your own destiny 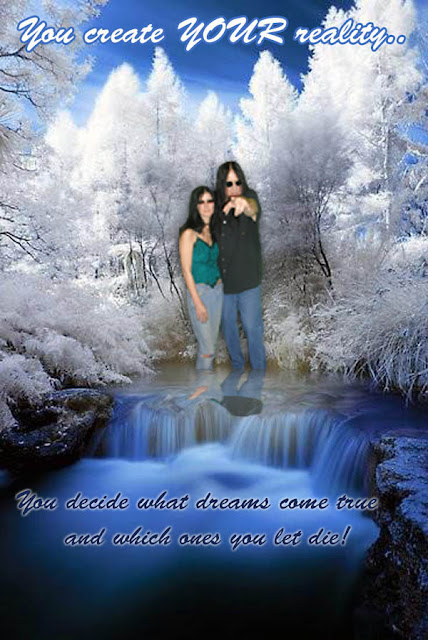 On August 28, 1963 when Martin Luther King Jr. said; "I Have a Dream" it meant he had high hopes for the future.  He didn't say "I have a dream but all I see is doom and gloom"!  He was looking to the future with a hope and expectancy not dread and that's all I see people doing now. I realized people have changed over the years but come on now! Look, I know this world is a mess... no question there... but then you have people out there who add drama to everything else going on in the world and I think that's messed up!

So, who controls yours?  Do you live your dreams or are you like most and it remains just that... a dream? It's been said that a dream is just a wish of the heart but when do those wishes become reality?

You have to understand where I come from... unlike some people I have not had the opportunity as others had in fulfilling their dreams. Take my husband for instance; Robbi Spencer. He grew up in music and as a child he was encouraged and pushed by his folks to pursue music where he learned piano and was singing, writing songs at a very early age and progressing from there where he eventually became a music producer and an artist manager in the music industry with many hit songs under his belt, music videos and being known as a highly respected producer where people would do anything for him or just to get on his good side.

Me on the other hand wasn't as fortunate. I was told as a child I was wasting my time and it was a silly dream and to leave it as that. But no matter what my folks said, I continued to pursue music anyway and wrote my first song at a very early age and was singing and playing guitar regardless of the discouragement I received. I went it alone in pursuing my dream of being a signed recording artist.  I was discouraged by my folks every step of the way until my dad when close to dying in 1994 when told me one day of of the blue that he knew I would make it one day in music but he also added that he wouldn't be alive to see it although he said he wished we would be and he was right and I too wished he was here because I loved my dad and he would be proud of me. But I didn't let the discouragement completely stop me. Trials in my life may have slowed me down because of what was called "an act of God",  but eventually years later I began pursuing again.  I recently realized my folks would tell me that because they didn't want me hurt in the music industry like so many others have been. But you can't stop something that is a part of you and your destiny. If you read my book you'll have a deeper understanding of the trials I had to go through that did kill any and all dreams I had. But it was also "an act of God" that brought it back because I was made clear I wasn't supposed to live through what I did, and I too was very close to dying but when God has other plans for your life... then... it is what it is.

But when I thought my dreams were just that... dreams... God used my husband to make them come alive. Robbi signed me to his record label "Progressive Edge Records" and SE Studios in Dec. 2011 and made it clear up front he wasn't signing me because I was his wife but because of talent. He also made it clear I would be treated no different then his other artists, which is the way it has been and that is fine with me. Although seeing the business side of my husband is still very different for me and is taking some getting used to when it comes to the music end of things it is a dream come true and I wouldn't have any other way! Things are a little harder for me because of what I've been through but I follow the rules, do what's right and thank God for everything!

If people spent more time pursuing their dreams, desires, goals, aspirations and spend more time making everyday productive and making each day count and less time looking and living for all this doom and gloom then I think the world would be a better place with less violence, less drama and a whole lot more hope!

Who's in control anyway?

You control your own destiny! Sure, no one knows better than I do that things do happen that are beyond our control, but if it's a mindset... change it! After all, where the mind goes the body follows, and as a man thinks in his heart, so he becomes and that's from the bible baby!!! So to you it may be just another blog, another opinion, (like the world needs any more of those, right?) It's still what I feel and when I see these people who live their lives everyday for all this Doom and Gloom crap when there's enough problems in the world it only adds to the hysteria and chaos we all already have to deal with on a daily basis and we don't need that.

Posted by Shirl Spencer at 7:11 PM