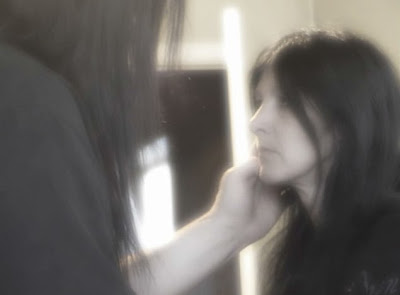 Robbi Spencer, 44 at the time, receives a message online from a young lady saying, "Hello!" The young lady was 3 months younger then him. The woman falls in love with the man, it was love at first sight for both of them. She didn't even know his name or what he did. All she knew was it was real and she knew he would be her husband, the feeling of real love scared Shirl and caused her to run from it (and Robbi) for 4 years. Robbi and Shirl begin communicating again, both still in love with each other. Finally after Shirl quit running from her heart she ran straight into his arms. Shirl learned not long after talking with Robbi that he was a music producer and that caused Shirl to not talk about her music with him during the years she ran. Eventually she would start to mention it but quickly would drop the subject. After the two were married, Robbi signed her to his record label and became her music producer. He tests her spirit and she tests his soul but together they were and still are unstoppable. Together they live the fairy tale life making music, music videos, movies along with several other programs that you can watch on YouTube, Progressive Edge Records or SE Studios or several places on the net.

So what do all these people have in common?

Each and every person in this blog that I mentioned has had an effect in my life that altered my course in music and/or changed my life in a positive way that I'll never forget!

So, What exactly is a Shooting Star?

If you're not talking about a shooting star that you see in the night sky, a shooting star can have several meanings. It can be a person who goes straight to the top or is it a person who gets shot down at every given chance. A shooting star is also anyone who is or partially responsible for biggest and positive influences in a persons life. There are so many unseen forces at work, some that destroy and some that help and those who help my friends, are the shooting stars.
Posted by Shirl Spencer at 12:14 AM