The simplicities of life or just being simple? What's the difference? 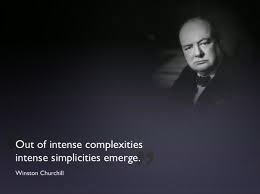 You've all heard the saying, "Stop and smell the roses" but has anyone really thought about what that really means?

Albert Einstein once said, "If you can't explain it to a six year old,  you don't understand it yourself."

noun, plural simplicities.
1.
the state, quality, or an instance of being simple.
2.
freedom from complexity, intricacy, or division into parts:
an organism of great simplicity.
3.
absence of luxury, pretentiousness, ornament, etc.; plainness:
a life of simplicity.
4.
freedom from deceit or guile; sincerity; artlessness; naturalness:
a simplicity of manner.
5.
lack of mental acuteness or shrewdness:
Politics is not a field for simplicity about human nature.

1. You're only as good as your last song, appearance and/or performance.
2. There is always someone better than you.
3. K.I.S.S. (Keep it sweet & simple)

Has anyone ever tried the more simplistic approach to things? Jesus said in Matthew 8:3 and I quote...

"And said, Verily I say unto you, Except ye be converted, and become as little children, ye shall not enter into the kingdom of heaven."

Don't let that confuse you with 1 Corinthians 13:11 where it states;

These two verses can be summed up quite easily,,,  1 Corinthians 13:11  is talking about growing up and being mature while in Matthew 8:3 is telling you to continue to have the heart and faith of a child while you're an adult. It doesn't mean to always act like child, but to have the heart and faith as a child. Big difference! So often people confuse those scriptures when it's really quite simple.

Now.. some of the greatest minds and the most inspirational people to ever walk we're genius's and known for things they've done but the truth is, it couldn't have been accomplished without the heart and faith of a child in Jesus Christ.  How is that possible you may ask?

Simple..here's a terrific example.  Smith Wigglesworth who was born on June 8, 1859 in Yorkshire, United Kingdom and was known as a British evangelist and faith healer who made historic impacts in the early history of Pentecostalism.

Smith Wigglesworth, often referred to as ‘the Apostle of Faith,’ and was one of the pioneers of the Pentecostal revival that occurred a century ago. Without human refinement and education he was able to tap into the infinite resources of God to bring divine grace to multitudes.

Thousands came to the Christian faith in his meetings while hundreds were healed of serious illnesses and diseases as supernatural signs followed his ministry. Smith had such a deep intimacy with his heavenly Father and an unquestioning faith in God’s Word which brought spectacular results and provided an example for all true believers of the Gospel. Simply put.. God said it, he believed it!! Period.

When Smith read and understood that through Jesus he can do anything with his faith, he began going to county morgues and funerals and raising the dead in Jesus name and going to hospitals and healing the sick. More people like Smith can, without a doubt put many hospitals out of business.

My husband learned that keeping some things simple is all it really takes to obtain many desired results. How? Here's an example, Last night while I was in another part of the studio, he heard noises that were coming from the door in our bedroom. Knowing full well it was imposable to be me, and knowing the history of the studio has being haunted, he heard the Lord speak to him and told him to speak like a child to the noise. He sat up, pointed and said "Hocus Pocus, you're in focus" and immediately the spirit was stunned by what he said and manifested itself. Robbi could see it was "Elizabeth" the spirit girl who has been known to hang out at the studio for some time.

Being simple or simplistic doesn't mean lack common sense by any means and sadly... too many often confuse that or somehow gets lost in the translation. Use common sense, continue to grow in your education, experiences and the lessons of life and use them to help other people and improve your own life. Use your childlike faith to live every day and see how your life will change and improve for the better and not only that, see the desires of your heart become reality.

There is no need to make things more complex or confusing then they already are, use your faith. Your childlike faith in Christ and see your life transform before your very eyes. Complete childlike faith in Christ is all you need and Christ will do the rest. You have overwhelming bills, problems and things bigger than you on your plate? With the heart and faith of a child, give it God in Jesus name and see what he does. Just remember to give God all the glory and continue to live your life as such and I promise, according to God's word you shall receive what you ask for. Below are 2 versus read them carefully and slowly and let it open your eyes to the reality you could be experiencing.

And Jesus said unto them, Because of your unbelief: for verily I say unto you, If ye have faith as a grain of mustard seed, ye shall say unto this mountain, Remove hence to yonder place; and it shall remove; and nothing shall be impossible unto you.

You can read this article on Before it's news as well by clicking here.
Posted by Shirl Spencer at 8:52 AM