Why is common sense so uncommon? 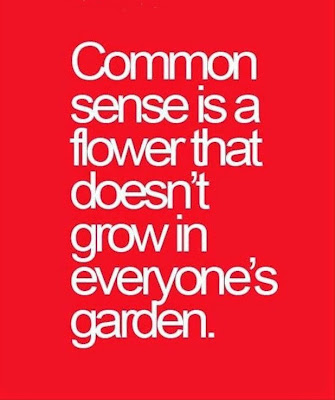 One thing I guess I could never understand is why common sense is so uncommon. Seriously, did you ever want to take a person and just shake or smack some common sense into them? I find myself getting more and more frustrated with those who lack simple common sense. Those who lack common sense are more likely to take a laxative and a sleeping pill at the same time. Doesn't make much sense does it?

Last night I had a dream where Robbi and I seen this woman. She presented herself as having it all together. When we went to see her at her place in my dream and when we got there, we freaked. It looked as though she was living in a run down place and she was sitting on the floor when junk, boxes and garbage everywhere. She was sitting on the floor typing on an old typewriter, struggling to get the typewriter to type certain letters and half the letters were blotched. Meanwhile she had different technology at her disposal. I looked around and I said out loud, "An old typewriter, seriously? You can't get beyond that?!" Robbi was shushing me, saying, "Honey!!" Sounds a lot like when we're awake, I make these little comments and Robbi either nudges me or tells me later, "I can't believe you said that" or later he tells me he was thinking, "oh no you didn't".

Those who never use it are those who usually do things backwards, taking longer and yet think they're doing great, meanwhile everyone else is 3 steps ahead. It's really hard dealing with those on a daily basis. Showing them how to do something and yet they can't figure it out. Now, I realize there are some who are naturally slow, I'm not talking about them. I'm talking about the ones who make themselves to be something they're not because when you put them to the test it becomes an epic fail.

So with that being said, I think my rant for today is pretty clear. Don't ever make yourself appear to others as something that you're not, and USE COMMON SENSE!!!! PLEEEEEEEASE!!!!


Until Next Time
xoxo
Posted by Shirl Spencer at 7:51 AM