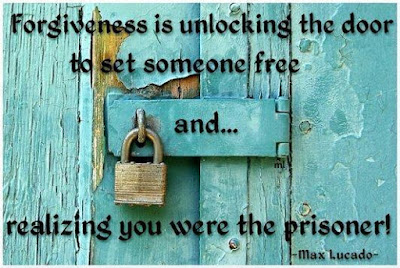 I'm writing this because some of you know what I have had to endure. I have learned that there is power and freedom in forgiveness. If you're having trouble forgiving someone then look at what I had to forgive and ask yourself... is it really that hard to forgive this person who did this me and she can forgive a person who did that to her?

If you can forgive the one person who hurt you the most at the worst time of your life, lied about you as a mother and a person and then either threatened others or manipulated others to help completely destroy your life, conspired with your oldest son with the agreement he would have joint custody of your child as well as conspired with your so called friends to take you out and has even taken your child while laughing and tormenting you for years, used your children as tools and weapons for your destruction and telling lies to the church to so no church would receive you and putting down your deceased children and laughing while you're sitting there crying from the depths of your soul and your spirit is broken and continuously doing actions against you that even stripped you of the mere feeling of being some kind of a human being that led you to praying to die everyday, a deep depression with no reason to live.... then you've approached a mile marker in your life.

I know this because I finally came to the place where in my heart, I truly, TRULY forgave this person. It was because God's word says, Forgive and you will be forgiven. I couldn't understand because I never struck back at this person, yet they continued to strike. I loved him with the Love of Christ and constantly prayed for him while he used my prayers against me to laugh and torment me.

You would think that I lived in Haiti or something because the actions against me were so cold, cruel, horrible and inhuman but I wasn't.... I lived in the good ol' USA. But when you're dealing with evil people, corrupt politicians, senators and judges... it's who ever has the most money wins... regardless! Don't let those southern states fool you when they claim to be 'The Bible Belt'. In fact they give Bible belt a whole new meaning for me.... they beat you using the word of God against you while they're claiming you're the one whose in the wrong. When the truth is, you did nothing wrong. So it can be a real mind fuck. Just use your God given discernment when it comes to these places and people.

It wasn't easy for me, in fact it took me until just recently to reach that place where I can really, honestly and truly forgive not only the one who did this to me, but all those who helped him to achieve his desired goal, my destruction. But.. God is my avenger! God will correct things and things will shift in the physical and it shifts in the spirit. And truth... and only truth will emerge from the ashes. Many there will be shamed, but the truth will set them free for no longer will they have to hold the secrets of darkness any longer.

For it is not God's will that any perish but that all come to the knowledge of God. For many have been lied to over the years as to why I disappeared, not knowing the real reasons were because of the harmful actions of the who lied about my disappearance. They tried to end my life in more ways than one but my God, the most high had preserved my life and moved me out of harms way and for long even I didn't understand why he would save my life from the hands of these evil people since I no longer felt as though I had any reason or purpose in my life so I figured, why live, what's the point since my kids are gone? 4 of my children were in heaven, my daughter was gone and my ex and his friend lured my two sons away. If fact, it was my oldest son is what made all this possible for him to succeed. Although my oldest was sorrowful for a while for what he did and I thought he actually changed but unfortunately he went back to his old ways of doing things which is not a good thing.

But God had a plan and a purpose for my life and God knew I couldn't be continuously tormented and falsely accused any longer because that would have led to my murder by these people as they so desired because the break ins and threats was leading to that point. It doesn't take much of a brain stem to know that.  Although the courts said I did nothing wrong but they didn't want to disrupt my child's life to switching custody to me. That's what you call a corrupt and paid court.

You have to understand, it's not the person completely who is or has done this to you. Sometimes people sell their soul, thinking they'll just repent later. For some, they do repent and make things right. For others.. later never comes because something in their life causes them to be removed from the earth. When someone wants something so bad then desperate people will do desperate things even as far as selling their souls for something they want or for control of another person and/or situation. Although the person thinks they can repent later... later doesn't always come, so be careful in the decisions you make in life. Many times I thought I had forgiven him, but something would trigger anger, rage, depression, etc. The last time these harsh feelings came up... I was like... okay... this has to go and Jesus delivered me and I have not felt any anger, rage or depression or the feeling of just laying down and dying for quite some time now, praise God.

After I had completely forgiven him, I had a vision. I seen myself walk up the last two steps into heaven and seen my 4 children waiting for me, standing there applauding, smiling and acting as if I won a race. (I say 4 because 3 of the children passed in 2002 and the child I miscarried in 1987) God has now blessed my life and confirmed it this morning that he will continue to bless my amazing husband who is a real man of God and myself until he comes for us.

Remember... unforgiveness is like drinking poison and waiting for the other person to die. It's only going to hurt you! Forgive, give them to God and LET IT GO!! When you forgive it literally unlocks doors in the Kingdom of Heaven that you never thought would open.There is power and freedom in forgiveness and a sense of a giant weight being lifted off you.

If you're not saved, just say with all your heart, Jesus forgive me and be Lord of my life.
It doesn't have to be a long prayer. Mean what you say and say what you mean. But, get straight to the point. If you want to talk more with the Lord, he would love that. But becoming born again isn't a hard process when you mean it.  Let Jesus come into your heart and lead and guide you. Not sure about something ask the Holy Spirit to lead and guide you and he will.

You're going to love my next blog about why aren't prayers being answered?? Stay Tuned....

Posted by Shirl Spencer at 3:07 PM